Or how to use Atoti, the ActivePivot Python library, to play and run simulations on Formula 1 historical data, directly into a Jupyter notebook.

A case designed and developed by David Chevrier, CTO at Diggers.

First of all, let’s quickly explained what is Atoti Free Community Edition:

“Atoti aims to help data scientists design, explore and deploy efficient and flexible data models. It comes with a JupyterLab extension to interactively build data-viz widgets, such as pivot tables and charts, right there in the notebook used to create the data model.”

See Atoti’s article on Medium for more information: Getting Started with Atoti.

I have been a F1 fan for years now. Like in any other sport, there exist passionate and endless debates about who is the best driver in history. A question impossible to answer, given the number of parameters that could be taken into account.

A simple parameter to start with is the number of points scored by drivers each year: it’s a simple and factual way to compare drivers over years. But the issue is that scoring systems have evolved over time, creating distortions between championships.

You can download the Jupyter notebook F1 data analysis with Atoti from my github, simply follow the link!

1. Initialization & creation of the Atoti session

Creating an Atoti session only requires few lines of code:

We need to import the data into stores, all the F1 data is available on Kaggle, from 1950 to 2019 (here). We will import here the data related to drivers, races and race results.

Once the stores are created and the data loaded from the csv files, we can link the data stores.

Finally, run the load_all_data() command to load all the lines into memory (see this article on Atoti for more details on the automatic data sampling feature).

We will create only one cube in this tutorial, to generates aggregates (measures) on race results data, on different dimensions (levels).

Ok, the basic setup is done, let’s run a first data visualization in order to check if everything is ok.

The result is the following table (the parameters of this view are saved inside the notebook): 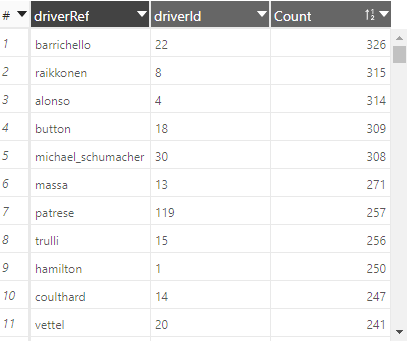 You can also choose between different type of charts, for example below a tree map representation of the total amount of points in career by driver:

Total number of points in career by driver (treemap)

In this first tutorial, we will focus on the points.SUM measure created by default in the cube.

We can run some queries, a query returns a pandas Dataframe. 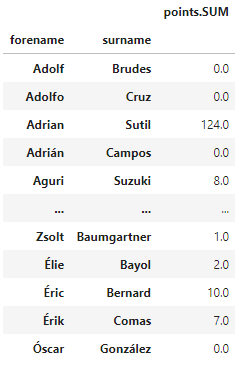 A query can be filtered using the condition parameter.

You can also build charts with advanced filters, such as the ‘TopCount’, which is configured directly in the widget. 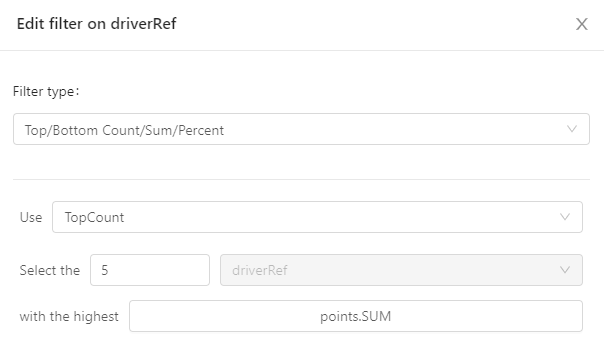 We now need to create specific measures to determine, for example, the world champion name for a given year, based on the total of points scored in all races of the season.

Step 1: we define a measure to calculate the maximum number of points scored by a driver:

You can run this aggregation per year, but you can also use it on any other dimension! For example, to determine the driver who scores the more points on a given venue, like this:

Step 2: we define a mesure that will return the max value between different drivers on a level:

To illustrate the difference between these 2 measures, let's run the following query: 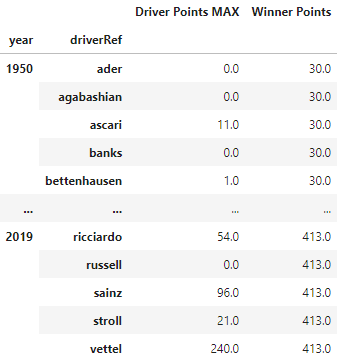 Step 3: we finally create a new measure 'Winner' that will only return the first driver among N where the sum of 'points.SUM' equals 'Winner Points' result

As a result, we can now query the list of world champions (with the simplified model as mentionned at the beginning, meaning that the results are only correct for years between 1991 and 2018 exlucing 2014):

At this stage we can create a simulation, with different scenarios corresponding to the different scoring systems we want to test.

We will load in the simulation the scenarios with the following scoring systems:

We're done! We can now visualize the impact of the different scenarios on the World Championship results, comparing the name of the WC per year.

In this table, we highlighted the changes in red (by adding some conditional formatting to the MDX code in the widget): 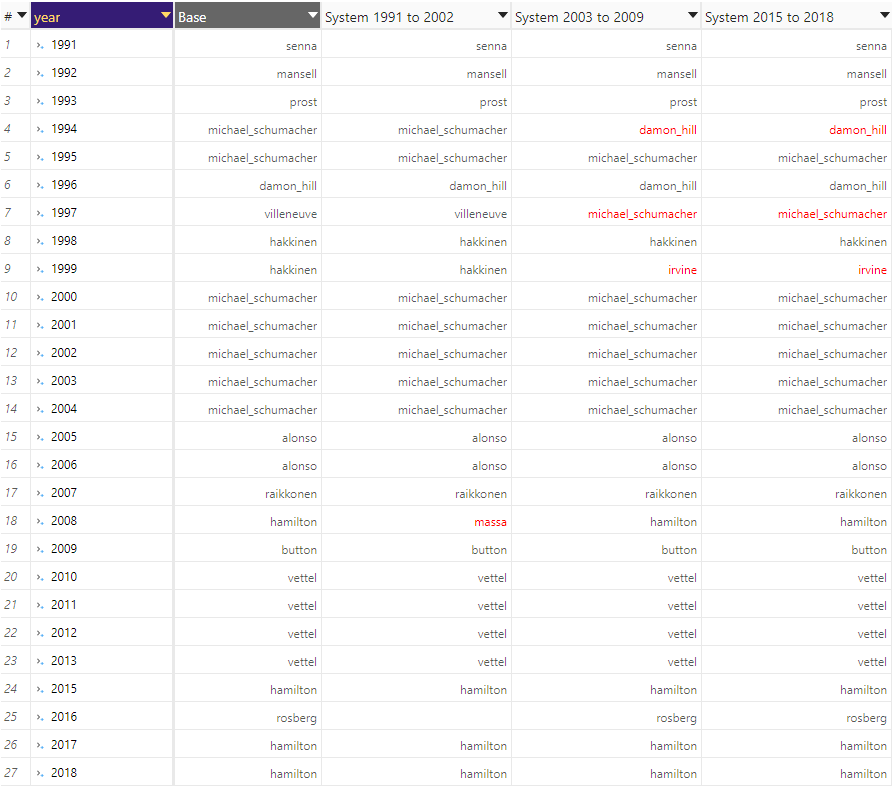 For those of who who are now curious, you can watch the race summary here ;)

I hope you enjoyed this lecture. It’s a basic tutorial on how to use Atoti, we will continue with more advanced examples in the future.

Diggers is a consulting firm, expert in business, technological & cultural transformations, created in 2018 and built on sustainable principles: people and personal development are the very core of our model. Our inner conviction is that creating value for our consultants will create value for our clients, our partners, the company itself, and our whole ecosystem.

We are an ActiveViam partner since 2019, helping our clients to define their IT architecture around the classic Java version of ActivePivot, develop performant applications for data analytics and reporting in ActiveUI or in customized front-end applications. We are now ready to provide our expertise to our clients on Atoti, the Python API for ActivePivot, making available the power of ActivePivot to Business Users (such as Data Scientists, Data Analysts) directly into their JupyterLab environment!